Jesus Wrote My Blog: What He Thinks of the Election

I am hi-jacking April's blog today to clear up a few things before the election. Some of my children, the ones on the short bus, claim to have read my book. Many cannot read to begin with so they probably listened to the book on tape version. But let's clear the air about the Bible shall we? For starters, I never wrote it. The Bible is basically a diary of the happenings of life before and after me. I am just that important, what can I say? I have millions of followers coupled with an absentee father who let me get nailed to a cross. My mother was a Virgin. My father was a carpenter. What I am trying to say is that MY STORY HAS BEEN LOST IN TRANSLATION MANY TIMES. Some people added their own spice and some things got mistranslated in general. I have been in Hebrew, Latin, Greek, and English just to name a few. Cool, huh? Random House will you give me a book deal?

Now that we are on the subject I have never, ever disrespected women in my scriptures. There has never been anything said about a woman's right to choose. I think women need to choose to respect themselves and have fun but be smart about it. After all, I shacked up with a lady of the night and she was one of my best followers.

Also, I never said anything about disrespecting gay people. Let them be gay. Let them marry men and women. As long as they are decent people. Gay men created Broadway and make pretty music. They make the world a more beautiful place. Lesbians are the best plumbers, contractors, and stage managers there are. Plus they have a monopoly on softball, volleyball and basketball. God made no mistake when he made these decisions. Did I mention they wrote a musical about me? Oh gosh I am melting. Hugh Jackman come on over!

This same misunderstanding and hate was the catylist beind the anti-Civil Rights movements in the South. Many preached that I said that blacks were better off as slaves and subserviants. I never said such a thing. If anything, in case you haven't heard the blacks make better music in their churches and I have more fun there. God also gave them the ability to make great music and to play basketball and football. Racism disappears when there is money involved. The devil created racism and God created money. You decide which one wins.

We have a black president right now too. He's got my vote.

As for our Jewish brothers and sisters, they might not believe in me and that's fine. They cook well and their mothers nag and I empathize because I grew up with a Jewish mother. That is why I know the importance of hard work, discipline, and balancing my check book. When they get to heaven I always make sure they are my accountants. God makes no mistakes.

I like the Arabs too. They believe I am a minor profit. While some people would kick and scream it's like being a huge star in America but only a supporting actor in Japan. I can live with it.

I feel like a woman should have the right to choose. No one goes to the abortion clinic because they are bored on a Thursday.

I feel like the gays should marry. Let everyone be excited about planning the wedding.

I feel like there should be socialized healthcare. Everyone regardless of who they are deserve to be cared for by a doctor. In case you did not hear I love all and come in the form of a beggar from time to time. That is why all my children should be cared for.

Pat Robertson is not my creation. He is an alien.

Mitt Romney is not a Mormon but secretly worships the devil. I don't take it personally, Satan needs her fans too. What, you thought the devil was a man? Come on, something that angry and deceitful must have some hormonal influx once a month.

So vote wisely tomorrow. Also, keep those affected by Sandy in your prayers. They did nothing to deserve this devistation. My father is doing his best to deliver. We all are. The end of the world is not coming you morons. Instead we have a few hundred more years of this. My dad is having too much fun with his toy creations, I am just walking on water to keep in shape, and the angels are playing poker. If the world ends it will be the end of our fun.

Son of God out 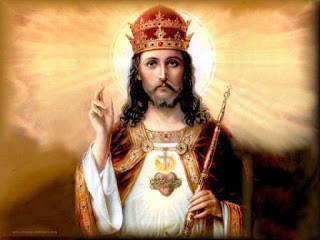 Posted by MissApril at 7:13 AM