Hero of the Week: Larry DePrimo

The story began on November 14th. There was a homeless man who was without socks or shoes. On the blustery night Officer Larry could feel the cold seep through his two layers of socks and boots. Ordinarily on patrol in The Village, Officer Larry was covering Times Square that night because of a shortage of people. Anyway, he heard two passerby's snickering about the shoeless and sockless old homeless hobo. Officer Larry caught site of the man and thought, "If I am feeling the cold he must be freezing."

Officer Larry walked over to the homeless man and asked him if he had anything to cover his feet. The man said, "Sir, I have never owned a pair of socks or shoes." Officer Larry, saddened by this man and perhaps feeling as if he had entered some tragic Dickens novel, asked the man his shoe size. He said that he would buy the man a pair of shoes and didn't care what the cost was.

So Officer Larry went to the Sketcher store and spent one hundred dollars on a pair of boots and gave them to the guy.   The tale would have stopped there except a tourist from Arizona caught the whole thing on camera. The photo was posted to the NYPD's facebook page and garnered almost a million likes! And now he is in the New York Daily News.

Officer Larry DiPrimo did not know he was being captured on camera and he did the right thing for the right reason. That is rare. I also hope he is single....

Either way,it's a good story to start off the holidays. 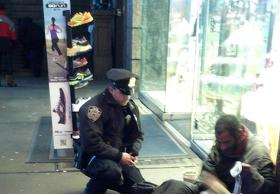 Posted by MissApril at 8:01 AM