I was twenty four years old and had hit the skids in my life. The market had popped and it seemed every job I had depended on was drying up. Things were not going my way. It seemed the harder I worked the more doors seemed to slam in my face. October through December had been tough. A television appearance I did with May, one that is ironically starting to make us legendary, made us underground heroes but closed doors, as in ones that paid, in our faces. A pilot that was supposed to get picked up didn’t. The man I loved dumped me. And after being careless I had gotten myself into some money trouble. Not to mention through politics I was cut from a show that I deserved my spot on, but was shafted for a less deserving woman because they felt she would be a bigger name nevermind my TV exposure.

Now it was January, I was hoping things would get better but they weren’t. Money was tight, and the boiler in our building had broken and we were left without heat for two days. I had eaten at an Indian place that gave me severe food poisoning. Only now was I recovering. I told myself life couldn’t get much worse.

And then it did. I ended up in the Westchester to do my delivery. After a long week of cold weather and other drama I wanted to get in and get out. In front of the train station as usual were a row of cabs. Man of the drivers were obscured in the darkness. I took the first one in line. Climbing in I saw the outline of a man. At first I thought nothing of it. I had taken plenty of cars and had plenty of drivers.

I was like a stripper in that respect except I kept my clothes on. Looking in front of me I saw my driver. He was thin as a skeleton who escaped from the local cemetery. His skin was as dark as the night and had a leathery quality as it sort of stuck to his body. Something about the way he was built seemed eerie and made Michael Jackson look human. The hair on his head was a mix between being matted down and dreads. The hair on part of his head seemed to be missing all together. I looked closely. Were those burn marks on his head? Was this a bad Jerry Curl accident at the local salon? I didn’t ask. Anyone who knows me knows that I have an excellent relationship with my drivers and eventually they divulge everything. Still, this man seemed much too creepy.

I greeted the driver with a hello and asked him to take me to the allotted destination. Usually it is followed by a hello and a yes. Instead he let out a weird sound. He said, “Eh.”

The driver turned around to look at me. He had a freaked out look on his face, almost as if he himself had escaped from hell but had lost his ability to speak. Between his pitch dark skin and the night blackness I could only see the whites of his eyes which had a dead quality. What was going on and who was behind the wheel of the car? I couldn’t tell. Panicked I gave him the address again. Maybe this place was evil. Maybe this whole town was evil. Maybe I had wandered into a nightmare. I pictured the character Christoff Durant from the Serpent and the Rainbow. The real life Clairvius Narcisse, he was a zombie who had escaped and lived to tell the horrors of life as an undead slave under the power of a witchdoctor who made him do his bidding. I still remembered Mariel, the woman from the mental institution who had also been zombified in the film. She couldn’t speak she could only scream because she saw death. Then it clicked. This man was a zombie. But there were no such thing, right? At least that is what I thought.

I had also read extensively on zombification. Sometimes people were turned into zombies over land disputes. One man was turned into a zombie because he knocked up three women in the same town. What had this man done to become a member of the undead? I dared not ask. Was he like the zombies in the other movies? Would he eat my flesh? Dear God I did not want to know.

We began to drive. As the moon shone through my window I could see various scars on his arms from burns and cuts. Perhaps some evil witchdoctor had beaten him when he refused to be a zombie slave. As he drove I studied his hands. His left hand looked fine, but on his right hand there was a thumb and index finger missing! I almost screamed at the sight of this. What had happened to his fingers? Had they rotted off! I fought off the urge not to scream. He was going to eat my flesh. Oh God!

We took a series of back roads and passed a cemetery, probably where he lived along with his zombie wife and children. They were going to eat my flesh it was official. He left out some other inaudible sounds. I asked him what he was saying. The man stopped the car, turned around, opened his mouth and revealed he had no tongue. I was too scared to scream. Instead I turned a deadly white. Where was the nearest Catholic priest? I was dead it was official. Maybe he was delivering me to his bukor and they were going to zombify me. I thought I had problems before. Now my life had gotten much worse.

When we got to the destination I asked him how much. Again, he could barely speak and made out to what I understood to be ten dollars. I didn’t understand zombie nor did I want to. I just wanted to do this delivery, get out, and live long enough to get back home. I jumped out of the car with the undead driver still behind the wheel. I slammed the door and began to run. I didn’t want the undead driver to find me. Usually I am very compassionate but this man was undead and I couldn’t afford to take any chances.

I stood behind a set of snow covered bushes, peering. He was still there! What if there were more zombies in this town coming for me? I had to get away.

The delivery ended up being a good one. I changed in a child’s nursery, that belonged to an infant that was alive and well. Unlike my driver this baby was very much a part of the human race. It had all of it’s fingers and toes and had a sweet lively glow. Even when it pooped it’s diaper it was a gentle reminder that this was a person, not zombie baby. It wouldn’t be set to devour my flesh. It didn’t answer to a witch doctor. It had a shock of brown hair and actually grabbed my finger to say hello. Sure’it’s grip was iron, but baby’s usually have iron grips. It didn’t have the zombie grip of death.

When my job was done they called me a taxi. I dreaded the same zombie driver, this time stopping to take me to the graveyard. When the driver pulled up I saw he was surprisingly human. When I jumped into the car he remarked that I was glad to see him. I recounted my tale of horror. When I finished my driver was silent for a minute and said, “So you met Jean-Claude?”

“The undead has a name?” I asked puzzled. “Are you sure he’s not a zombie?” The driver laughed and told me a lot of people were scared the first time they saw him. He proceeded to explain that Jean-Claude was actually a political refugee from The Republic of Congo, if it is even called that now. Jean-Claude’s family had been killed and he had been interrogated and tortured because his father opposed the regime at the time. Apparently when they were interrogating him they burned him, electrocuted him, and when he talked back they cut his tongue out, that’s why he couldn’t speak. In their sick and twisted way, even when his tongue was gone they pressed him for answers and went for his fingers. Apparently somehow Jean-Claude had escaped death. However the rest of his family was killed.

Now I no longer felt scared of my zombie driver. I felt rotten for judging him when he was doing the best he could with what he had. I felt rotten and spoiled for freaking out the way I did. If anything, this man deserved compassion and love, not the distain and horror of passers by. Yes, I had my problems and was going through a rough phase. But this man most definitely won first prize. Now I felt ashamed wishing that I had been kinder. Wishing that I had been the child my mother raised me to be. My driver continued to explain that Jean-Claude was actually their hardest worker. I felt even worse and continued to apologize. My driver smiled and shrugged. “It happens.”

I recounted that he sort of sat there for sometime as I made my journey down the street to my allotted destination. “Oh he just wanted to make sure you got there okay.” My driver informed me. “He’s very protective of women. He had two sisters that would have been around your age.”

I was silent for a moment. Although I had been freaking out in the backseat of the car this guy didn’t take it personally. I was too selfish and self-centered in my fear that I didn’t see that he was being kind to me. As a woman travelling alone, many people try to take advantage. This man however was different. Sure, he looked scary. But under that exterior was a kind hearted individual who had been through a lot.

“Please tell him that I am sorry I freaked out if you can.” I said. “No problem.” My driver told me. As I rode home in a train car full of drunken kids I realized that I had learned an age old life lesson, to never judge a book by it’s cover. In this lesson I also had met the zombie driver, who might have scared me but ironically was looking out for me, making sure that I got to my destination safely. This story was a gentle reminder that sometimes life isn’t kind to everyone, and that people are in fact doing the best they can with what they have. And that is why we all have to be kind, compassionate, and gentle to each other.

I also began to realize that compared to Jean-Claude my problems were luxury problems. Maybe I wasnt getting what I wanted, but that would pass. This man had scars from torture that would stay with him forever. But he had a spirit that knew the importance of hard work, having a good attitude, and looking after women travelling alone. Everyone I know could take a lesson.

Jean-Claude, wherever you are, I hope you are alright. And I hope to get in your cab someday soon.

I Came, I Saw, I Sang: Memoirs of a Singing Telegram Delivery Girl 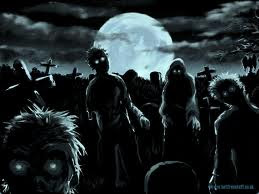 Posted by MissApril at 7:58 AM