Today I asked the president whether not not he colluded with Russia. Just like all of our encounters, this one too got no where.

Did he collude with Russia?

I am just as confused as you are.


To book go to www.AprilBrucker.TV
Posted by MissApril at 4:46 PM 1 comment:

Happy Memorial Day. Having a happy beach day (in my mind) 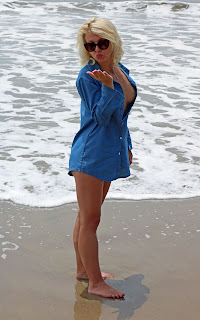 I am working on turning my book, I Came, I Saw, I Sang: Memoirs of a Singing Telegram Delivery Girl, into a pilot. At first I didn't want to. Part of it was cowardice, and part of it was I have been burned by the promise of so much more with my writing for so long.

However, as I started writing my pilot, I don't want to stop. Each time I step away from the computer I feel sad I have to go. I have broken plans with people so I could WRITE. Does that make me a write-a-holic? Is there is a 12 Step Program for me?

The last time I wrote like this I was 25 years old. I announced I was writing a book. My roommate at the time thought I was crazy. She was right. I was. One of my best friends at the time was a very flamboyant gay drug dealer. (RIP Chacho). I announced my plans and she was like, "Okay. You do that." In between her crying about some dude that didn't want her back and me lusting after my normal losers my book was filed in the way back of her mind.

I wrote everywhere. On the train. In the house. I had no idea what would happen next, but I finished my first draft by the end of the summer.

She moved out and moved on. I published I Came, I Saw, I Sang. Things happened and then they didn't.

Years later, as I write the pilot version, Broadway Singing Telegrams, I am writing just as furiously as I did when I was 25 years old. I write on the train. I carry around a notepad. When an inspiration comes to me it's as if heaven has opened and something miraculous has happened. I never thought I would live to write this, but I enjoy revision.

I had my first reading last week. It was nerve wracking to get it organized. It was exciting to hear my words read for the first time. It was endearing to see how my friends loved and supported me.

I am glad I am writing the pilot because this is my voice. For so long I let others try to tell my story, that's why it felt flat. This is the most authentic my writing has ever been. It's me, honest and bare on the paper about the life and world close to me.

I have no idea what will happen next. The wheels of fate might swing for or against me. I live with two straight dudes.

For better or for worse, there is no underwear in the freezer.

Putting It Out There

I have always written. My words are part of my wheelhouse. Heck, my verbal part of the SAT was near perfect. Math.......we won't talk about that. God invented the calculator and Satan is always making me use my fingers and toes.

As a kid, I loved being onstage. In real time I am extroverted and friendly, but there is a part of me that loves being in a library being lost in the stacks where I don't have to talk to anyone. I am a secret misanthrope. People piss me off and when I am hangry, I have no biased bone in my body. I hate everyone.

While I loved performing as a kid, part of me wanted to write the next great American novel. Fuck you Faulkner. So over you Flannery O'Conner. Here I am bitches and bastards!

It would have been an opus of coming of age tragedy. There would be a love story of a boy from the wrong side of the tracks and the good girl with the double life who does something messed up to get ahead. One of them would have to die. Maybe a boating accident. I would propose cancer but that is so overdone. Eh, AIDS.......now that cocktail is curing people. A murder......but then it's a mystery. Okay, I'm back to my outline.

What I am trying to say is, as a writer, you always want to write a book that can live for generations, and you want to write for writers. So yeah, I loved Moby Dick. I am the dick who loved the cetology of the whale. First week of grad school Pervical Everett called Moby Dick his cheesecake.

YUM! THIS IS GOOD FOOD FOR MY LITTLE WRITER BRAIN. FEEEEEEDDDDD ME!

However, as you read this blog you know I am not writing the great American novel anytime soon. I am just an awkward lonely woman waxing philosophical in her room. No danger of being great here.

If you have been following me (all three of you) you know that prior to grad school I considered myself a novelist and an essayist.  Sure, I acted and performed my own stand up and one woman shows. Although I read and acted in plays I could never translate my writing into that format. The more prose I wrote the less of a playwright I became. I tried to adapt my book into a musical and this composer looked at me like I got off of not just a spaceship, but a short spaceship. I wrote a screenplay based on my book, it was cute but it was too long. Part of grad school was that I wanted to network as a prose writer and get screenwriters to adapt my shiznit.

But I decided to bite the bullet and stop being such a wimp and genre jumped to screenwriting. I am having fun but am finding a surprising wheelhouse in screenwriting as I said in a previous blog. As I say to the point of my 3 readers wanting to shoot themselves, grad school has made me less of a wimp when it comes to revision. The talent ain't in the writing. It's in the rewriting. And the rewriting.And more rewriting. Writing is rewriting.

Whenever I hear a writer say they don't like revising, I want to tell them they are evil and stupid. Words had to die for their cowardice. Your work becomes like your baby. Why do you think Salinger never sold the rights to Catcher in the Rye?

As  Percival Everett says, "No novel is ever finished. It's only abandoned."

The hardest part of being a writer is abandoning your baby.

It means not crying when you press send.

It means getting difficult feedback.

It means taking the note behind the note without following it with,"Get fucked."

If you are a playwright or screenwriter, it means not fighting with your manager when you overwrite. It means not crying when you tell them you are only protecting your work against an incompetent or power hungry (male) director who will destroy every precious word you wrote.

It means trusting someone else to direct your vision and trusting that this person will respect your time and energy while secretly praying they don't destroy your script.

It means having your actor friends read your work out loud and being open to what they say.

It means being excited about having your actor friends read your work.

It means being excited about having your work directed and staged.

Yeah, I'm putting my work out there. Just as part of me wants to write the great American novel, I also want to write material actors will have fun performing and look forward to getting. As an actor, there have been so many times I have gotten scripts that have given me nothing and I felt less than excited. I want actors to get my pages and be excited, not just because of their words but because of what their imaginations can bring.

I want directors to be excited to make my stuff come to life. Sure, I have a death grip on my "precious words," but just as my work means a lot to me I know it will mean just as much to the people making it come alive.

With that being said, I look forward to sharing my pages with the world. And thank you to all my friends pushing me to have my work read. You are the reason I spew my crazy thoughts on paper........much love.

Posted by MissApril at 7:27 PM No comments: