Just A Change of Pace

Posted by MissApril at 1:08 PM No comments:

Producer: No, for the last time, the word is Daddy! 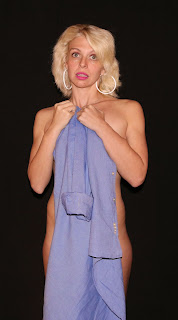 Posted by MissApril at 1:07 PM No comments:

I haven't blogged in a while because I have been learning how to be a screenwriter.

My MFA program's screenwriting/new media headquarters are in Santa Barbara. I still remember speaking to my now mentor who has been a working writer and teacher in Hollywood for many years. An NYU alumni like myself, she originally aspired to be a song writer. I said to her, "So luck and destiny had other plans and you became a screenwriter."

Mind you I am all about astrology. She says, "No. It wasn't luck. I had to work hard."

She wasn't lying. Screenwriting is HARD WORK that lit isn't. You have to read screenplays, outline them, watch the film. Most of the time the draft is different than the screenplay itself. A novel is eventually finished and put on a shelf. A screenplay, they are still rewriting and cutting as they are shooting.

At first I resented all the work that came from outlining screenplays. Now I love it. Is there a special place in hell for someone like myself? Yes. The truth is though, a good screenplay reads like a novel. You can't put it down. I would have never guessed.

When I entered grad school there were people who told me I didn't need to go. I was already a writer. However, what they didn't know was when it came to revision I was a complete coward. Grad school has cured me of that. Screenwriting especially.

I am currently drafting a pilot based on my book, I Came, I Saw, I Sang: Memoirs of  a Singing Telegram Delivery Girl. For years people approached me about possibilities. Some were well intended but out of their wheelhouse. Others were big dreamers who were all talk. Then there were the scammers. Each let down broke my heart.

I tried to draft screenplays and pilots, each being mediocre because I was a novelist and not a screenwriter. Most novelist are horrific screenwriters. MGM and the other studios would experience the flight of best selling novelists from back East who would hand in screenplays with too much exposition and dialogue. Studio heads would throw their hands in the air. I was aware of my limits. If paired with a real screenwriter I would give them the reigns. This was not my wheelhouse.

However, as I said I am learning how to do it. The pilot I have written is shaping up. One, I have stopped being a coward when it comes to revision. Two, I know that I am the only one who can truly tell the story about my world. I am the one to write this piece. Me and only me.

Studying screenwriting has made me a better actor and comedian. So much of my twenties were spent doing comedy and ventriloquism that I really didn't "act." I was too young to play the character roles I was good for and plus, I just liked creating my own work. Screenwriting teaches you that each word counts, which has made my joke writing better. Each character has a quirk for a reason,which has made my character development better. Each word matters, which has made me a better actor because just as that writer wrote that word for a reason, I know my character says it for a reason. Screenwriting has made me love collaboration as both a writer and an actor, because I no longer see it as a curse but as a gift to be a part of something greater than myself. It makes me appreciate being a writer and a performer, but appreciate other writers and performers as well, because without this most holy combination my work wouldn't exist.

I will say I am still not a great screenwriter. There is a lot of work to be done. The future of this pilot is uncertain just as the future of anything that's "brilliant" in ones mind. But grad school has opened a door that was always there that I was just too afraid to push. I think I might have found an accidental wheelhouse in screenwriting and I'm okay with that.

The last thing I will say is this. As I write, I have learned when a scene or piece of dialogue doesn't move a story along, no matter how smashing or witty, it must go. I know somewhere Judd Apatow, Alfred and Alma Hitchcock, and many others have cried the same tears. Yet these are also tears of happiness. With each draft, and each revision, I am closer and closer to where I need to be.......getting my work out into the world.

Posted by MissApril at 9:55 AM No comments: