Politics and Other Things

I recently got approached to do a show at a well known New York Club. My relationship with comedy has been a tad weird as of late. I headline and am starting to do so comfortably. I am also getting a master's in writing. I am back in acting class for the first time in years, and am onstage acting. I also do improv jams.

But I am also a political activist. My comedy is in just when I mock the president, but it's clear where I stand. Let's just say that. I want to be known for my work, but I can't help but have my opinions. I got derided in several writing packets by my program mentor for lambasting some wasteful imbecile a family member of mine either dated or married. I got lambasted by my acting teacher for playing opinion. I don't hide my feelings. I am easy to read.

The producer told me I would be seen by the booker and the possibility for regular paid spots was on the table. For years I have wandered New York without a true artistic home. Part of the reason I became a nomad was because I have been back and forth between here and the West Coast. So I was eager to hear him out.

He said he could put me up if I brought three people on a Monday night. Well, I have produced. I believe in paying one's dues. But I am also someone who headlines, appears on television, and has published books. I should be the act that's promoted, not someone who's relegated to bringing. It sounds egotistical, but it's a due I have paid. If I am going to bring, I am going to produce my own one person show and kill myself promoting it because I am the star of the evening. It's how I get the most bang for my buck.

Plus I paid the due of bringing. I barked. I have been there and done that. I think it's important for folks new to comedy to get the stage time. I feel it's important for them to pay that due and we can laugh about it. I also get this producer has a room minimum and I too have done shitty things to fill my room. I get that. So I was already leaning towards no.

I wanted to say no as nicely as possible. After all, I have produced. I know the pressure of packing my room. I have papered my room, too. I have had those I was papering my room back out and I lost money that way. It's a heart ache. No matter what you do you might get a sparse turnout or a cancelled show. This is why a lot of folks burn out on standup in New York.

So then the producer threw in another wrench. He asked what act I was going to do and I said the ventriloquism. Then he asked if it was Donald J. Tramp. Mind you last time I did a spot at this club I did both May Wilson and Donald J. Tramp. The producer said, "Rodney Dangerfield had two rules, no religion and no politics. I don't know what your political positions are, but the booker is old school."

I was being both degraded and censored out of the gate. This opportunity wasn't for me. Sure, I could have brought May Wilson, but even she's a commentary on women in society. The activist is a part of my fabric. It's a part of who I am.

Years ago I would have tried to change things to appease someone. But now, not so much. I have met comedians afraid to get political because they will lose bookings. They are right they will. Yet they are not afraid to be ordinary and have an act that's unforgettable because they are afraid of risks and failure. In playing it safe and not shattering the boundaries they will always be where they are.

My climb to headliner status has been a rocky one. I have been called "an angry woman" by male bookers because I tell the truth. I have been discouraged to talk about politics because I might offend. Comedy is jokes, someone will be offended by a knock knock joke. If you lead your artistic life that way, quit now. You will always feel stifled and stuck.

I would have been the nice girl years ago, but cervical cancer changed everything. My former partner had to go away because he had untreated PTSD and was using drugs again, and I was losing my home. My landlord tried to burn my apartment down. Even as I was wading through shit, I didn't think I would be told I tested positive for cervical cancer.

It taught me to take better care of my body, and to stop taking shit from people and things that didn't matter. It taught me to be honest, because life is short. Yes, I am missing out on being seen by a club booker. But I am taking those energies to create my own work in my own way with my own voice which is finding it's own audience. Then those club bookers will look for me.

And the question will in turn be, am I available?

Is this the harder way to go? Yes. But being an artist is being dangerous. It's dark. I just want to mention I have been dubbed "The Bad Girl of Ventriloquism." I hardly think I am "bad." I just think I am honest and take my risks. And if saying no to something that isn't right for me is a risk, I am okay with it.

Since getting back from the West Coast, I have been diving back into studying my craft. My master's program in writing has left me inspired. The theatre company I work with has motivated me not only to create and perform more of my own work, but to collaborate with other artists. As I find my voice on the page I am taking that same discovery to the stage.

Summer lulls in the Big Apple, and in between literary translation, a practice paper, and dreading my 5 page practice paper, I have decided to sign up for a film acting intensive. This is different from the classes I have taken at The Actor's Fund and the acting class I took each week where I ended up bringing in work I created. I am in front of the camera with no puppets. Just me learning how to cold read.

It's very humanizing. I am getting the same notes in my writing and in my acting. My mentor in my writing program congratulated me on getting my packet in early. However, she said I was judgmental in my writing pieces. Last night's class the note I got was I played attitude. The first writing packet I forgot to double space. First week of class I foolishly copied my sides and my scene partner had an interesting time. Both my mentor and my teacher were good about it.

I go to The Drama Bookstore and if I spend any more time in there I run the danger of maxing out every credit card I have. But I have overeaten, over drank, smoked, and dated people who were bad for me because they felt damn good. I have made worse decisions.

But recommitting myself, it's been a good one in some ways. My mentor in my program is great, but when I get a writing packet back there is always a tinge of doubt. Sure, I am more mature as an actor, but Tuesday night I was talking to someone and the old bullshit came up. I am never the best one in the acting class but the most unique. If it's a place where I write and create my own work with my puppets I rock it. That's my zone. I haven't identified as a dramatic, legit actor for years. I mean I guess I still am, but the time, energy, and passion has gone to being a puppeteer.

Suffice to say this class has me a tad out of my comfort zone at times. I thought about bringing an original piece to perform, but that's not the assignment. If I get a big film role, it won't be my work at this point. And besides I am a writer, it would be nice if I respected the words of others, right?

A casting director I once did a class with said it best, "Growth is sometimes painful."

I just want to be perfect all the time. I try so hard to be liked. Everything is personal. It's just the way I am made up. A friend told me to take some time off my reading. I told her I needed to go to the bookstore. She said, "April, if you go you will read. Read tomorrow."

So here I am writing. Not reading. Processing. It's easy to read but hard to live. Growth is sometimes painful indeed. But the growth and process are worth it. Because each step, no matter how arduous, gets us closer to the truth. 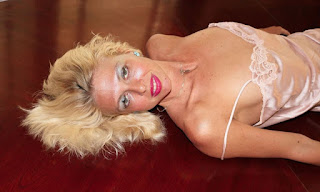 t's not monstrous that this player here,
But in fiction, in a dream of passion
Could force his soul to his own conceit
That from her working all his visage wanned,
Tears in his eyes, distraction in his aspect,
A broken voice, and his own function suiting
With forms to his conceit? And for nothing!
For Hecuba!
Hamlet

Posted by MissApril at 4:13 PM No comments: