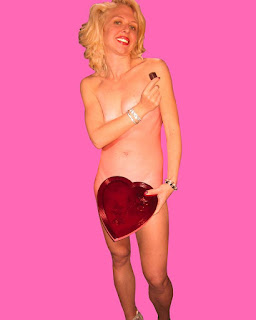 Posted by MissApril at 5:20 PM No comments:

Hey guys, I have a new act. It's shattering the glass ceiling by proving we are all beautiful. It's preaching sex positive feminism. It's returning to my natural roots. I mean really natural.
I am performing stand-up comedy naked!
Yes, I am doing my act in the buff. Are you laughing at my punchline or my waistline? You decide.
Posted by MissApril at 9:36 AM No comments:

When it happens you always feel like a victim. There is part of your brain that tells you that you are overreacting. When I revealed to female friends an incident that happened when I was younger, one where a group of drunken white boys accosted me and I kicked off my shoes in order to get away, I wasn't believed. This female friend told me it was my "bad decisions" and that "you always put yourself there."

Not only did I stop being friends with her, but it made me feel like I was alone. In my experience, the most awful group when it comes to women is not men, but women themselves. Trans women, for instance, are more likely to be raped and assaulted. They are less likely to report. Among female activists, many do not want to address domestic violence and how cops treat trans women as a joke. Because of this they suffer. It's not a choice to transition. The only thing trans women are choosing is less rights and more oppression.

This is why the TERFs like Rose McGowan turn my stomach and make me ill. She not only invalidated that poor trans woman who challenged her, but then she went on a self-centered, cisgendered tirade, therefore closing the discussion for all victims.

That being said, I have known women who unfortunately lie. The former girlfriend of a mutual friend, a drug addict who was later diagnosed with borderline, claimed he raped her. As the bandwagon formed, I had my doubts as she was known to lie. Later, she admitted she made the story up. While she is more the exception than the rule, there are these instances. These idiots who do this make it harder for the victims and less likely to believe. These liars are as bad as the rapists themselves.

Reading about Aaron Glaser this morning made my stomach turn. I had only met him once. He made my skin crawl. I didn't know why but I wanted to get away from him. When I read about what he did I was not shocked. Steve Crowder defended him which only made me believe the victims more. Aaron Glaser approached the crisis as an entitled whiner. I was part of the internet pitchfork mob bombarding his facebook wall.

Around this time, I revealed to a friend who I have become quite close with in the last two years. An older male, I didn't know how he would react but he is super easy to talk to. As I was waiting for his response, he gave me one I didn't expect. He said, "You went to New York to fulfill your dreams. You are still there. You're a survivor. Give yourself some credit."

He's right. I am a survivor. Some days are better than others but I am.

I get back at these predatory men not only by surviving, but by thriving. I have a career in comedy, laden with ups and downs. I have written two books and am working on a third. I released a calendar and line of merchandise. My one woman show is gearing to do a run in NYC, and I have started a master's program in writing. Life is not easy sometimes, but we all have a strike or two against us and we have to work with it.

Every time I think of the predatory men that hurt me, I use that energy to further myself because success is the best revenge. They will always be predators but it doesn't mean I have to be prey. I am not waiting for an apology I might never get, so instead I treat others the way I want to be treated, but treat myself that way, too.

As for Aaron Glaser, that NY Post piece was the funniest damn joke he has ever written in his entire career. Who believes that bullshit farce, #NOTME!

And one last thing, years ago I would have cried at the photo below because I was filled with such self-hate because of the damage predatory males did to me. Now I take them with style, not because I am acting out but because I want to and it's fun. So to all those doubters and predators, eat my dust, shitheads! 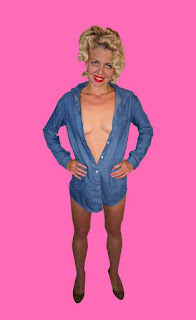 Posted by MissApril at 8:37 AM No comments: