The Great Beyond (REM)

Last night I went to an event where I got to finally meet an internet friend of mine in person. His name is Alain Nu. His moniker is "The Man Who Knows." Alain and I sort of met on facebook and began chatting on the regular. It was discovered we had a few mutual connections in Las Vegas. So when I found out he was in NYC I decided I wanted to meet him.

Alain warned me the place would be filled with so called "magic geeks." It was filled with magic geeks, but I found the lecture interesting honestly. Yeah, I am a huge dork. Put me in front of the History Channel and I am happy as a pig in shit. Plus as a ventriloquist I am no stranger to magic shops. Many times it's where I get my figures, and I shoot the breeze with the dudes doing card tricks.
As I suspected, I was the only female present. Actually, I take that back. One wandered in with her father and the other might have been someone's girlfriend. Magic is not usually a woman's game, which made it even more enticing. I am not a woman who minds playing with the guys. Actually, I think men play far more fair than women. That is what is setting feminism back, but that is a topic for another blog.

Apparently, there is some crazy East Coast v West Coast rivalry going on between mentalists and magicians. There is a definite turf war that I was unaware of, but in the dorkosphere I got a kick out of it. This crowd was passionate about both magic and mentalism. Alain did a coin trick and this would be David Copperfield in front of me spent the whole evening trying to master it. Actually, it was quite adorable. While he never did master it, I was going to give him high marks for persistence.
I learned the meaning of the word equivoque means. Yes, as in you can suggest something to your volunteer during a mentalist act.

There was a break and then the thing everyone had been waiting for, SPOON BENDING. Alain admitted he was friends with the very controversial  Uri Gellar. Yes, some say the man is a fraud because Johnny Carson debunked him on live television. Others stand by Gellar as a genius and true mentalist. Alain said that Uri Gellar is actually a super nice guy. If you have a friend or family member who is infirmed in any way, Mr. Gellar will call that person just to talk and cheer them up. Apparently it's not a one time thing. Mr. Gellar likes to keep in touch and is a true friend.
In any event, Alain had me help with the spoon bending. Despite my ease in front of crowds, I was also conscious that it was not my evening and therefore it was not my job to be front and center. Alain introduced me as his facebook friend and all. Then he had me autograph my spoon. He began to bend it. Alain said he wasn't giving away his secret......hmmmmmm.....

Then Alain hypnotized me and had me hold the spoon in my hands. Never in my life had I been hypnotized. Either way, maybe he was equivoquing me. Because I couldn't open my eyes and my hands felt glued together! Then I opened my eyes and I had helped bend a spoon. YA BABY!
Alain ended his evening by telling us this: "A lot of magicians go for the trick, but you should go for the miracle."

This spoon bending made me smile. It brought me back to the time when I was a kid. My dad had a friend named Arthur Valentine. Uncle Art, as we called him, was one of my dad's best friends. He met my dad when my dad was a labor lawyer on a deal. They were fast friends because Uncle Art was deeply involved with US Steel, and both my dad's dad and his grandfather worked in the mill, one as a master machinist and the other as a roll turner respectively. Uncle Art had been active with the union and had even been friendly with Jimmy Hoffa. Alas, he and Mr. Hoffa had a disagreement one day and Uncle Art dodged a car bomb  by literally seconds.

In any event, Uncle Art, aside from having a colorful personal life had an even more colorful companion. Her name was Cordelia LaMont. Aunt Cordelia was from West Virginia and was married to a guy simply known as Ram who worked in the mines. She herself was a seamstress and dance instructor.

In any event, Aunt Cordelia was on the picket line protesting for the miners. She was a bleach blonde with an hour glass figure adorned in hot pants. The camerman, probably overworked and rather sex starved, had a close up of her the entire time as the newsman was doing his voiceover narrating the strike.

Meanwhile Uncle Art was unhappily married to a super Catholic zealot who he had 5 kids with and felt chained to. Needless to say, when Cordelia walked his way he was rather smitten and left his family. His kids hated him and his estranged wife bitter. But eh.

While Uncle Art was cool, Aunt Cordelia was completely zany and bonkers. Most people tolerated her because they liked Art. Looking back he probably had a thing for crazy women and this is what kept getting him into hot water. What I am trying to say was, Aunt Cordelia was into UFOs, Ouija Boards, and the paranormal. When you met her, she spoke about her son Vince. Yes, the story we got to know so well. The young man was abducted by aliens and dropped into a gay cult.

During the time Vince was present, he would corroborate Aunt Cordelia's claims by showing us the plugs in the back of his head where he was supposedly probed. Oh, and he was simply leaving the supermarket, putting his groceries in the trunk, and lost track of time. Sure the story was insane, especially as a starter. But it was bold, I gotta give Baby Girl that much.

Aunt Cordelia not only introduced us to Ouija Boards but designed her own. She insisted that reincarnation was a real thing, and sometimes she was visited by her past lives. Skipper, Wendell, and I were enthralled. My father was less than amused, reminding us that we were Catholic and we did not believe in such things. Usually when my Aunt Cordelia started, especially the one where her dead mother walked her basement along with her dead husband that she was supremely unfaithful to, my mom would smile and bear it. Skipper, Wendell, and I would try to contain our laugher. The look on my dad's face was always priceless.

Aunt Cordelia was a student of Uri Gellar. For years she had been reading on psychic phenomenon. So much so that Aunt Cordelia, through Uri Gellar, became convinced she could bend spoons. As usual, during a get together, Aunt Cordelia espoused her evidence that the paranormal was real. Not only could she bend spoons, but she had been practicing. To prove her point she got out a wooden box with spoons that had been bent in various ways.

Then she invited my siblings and I to try.

Skipper and I, ages 8 and 10 respectively, tried with all of our puny elementary school brain waves to bend these spoons. It didn't work. I gave up after about a minute or two, but Skipper sat there and focused for at least five minutes. Akin to Kerri Strug on the vault, she was not giving up.
Wendell put his spoon behind his back. Always a strong kid, he bent it. I saw him cheat the rascal. Then he exclaimed, "Look, I bent the spoon!"

Aunt Cordelia was enraptured with Wendell's psychic energies. He was the hero of the night. I didnt want to burst Cordelia's bubble that my brother had cheated. Neither did my parents nor did Uncle Art who was forced to endure her.

During that part of my life, people made fun of her in a malicious way behind her back. Granted, the vodka guzzling, over made up, crack pot homewrecker did make herself an easy target. But Cordelia was creative. She was a hell of a seamstress, could make a dress out of scratch, and even designed an earring that my dad helped her get a patent on. Not to mention for as flipped out as she was, Cordelia was thoughtful, never forgetting a birthday or anniversary. She also was kind if you were upset like she was to me plenty of times when I was an over sensitive  kid. Oh, and she was VERY SUPPORTIVE when it came to my dreams, especially my writing.

The long and the short of it is, sure she was eccentric but she was harmless and at the root of it actually rather kind hearted. She made my Uncle Art happy and really tried with her stepchildren who hated her guts. But more than anything, Aunt Cordelia wasn't afraid to break the rules and didn't give a flying fuck what anyone thought of her. She wasn't afraid to have the conversations about UFOs, the afterlife, and the possibility that one could bend spoons. More than anything, she wasn't opposed to people telling her she was wrong, and spoke to children on an adult level about these things. The last update I got she had a severe stroke. Better give the poor thing a call.

Are there UFOs? It only makes sense with The Big Bang Theory and how Einstein's Theory laid the universe out, that Earth would not be the only place with life. Is there life after death? We shall never know. While I don't believe Parker Brothers has the gateway to the netherworld, energy can neither be created nor destroyed. As for bending spoons, Alain's secret is Alain's secret, and Cordelia wasn't cracking the code either it seemed.

The trick sometimes is that we don't want to know. That we shut our minds off to possibility. The miracle however are people like my Aunt Cordelia who aren't afraid to ask those questions even if it annoys the people around them. And the fact she wasn't afraid to try to bend spoons let alone be a zany presence to the consternation of others. People like Alain are also the miracle, magicians who believe in magic. Mentalists who are not afraid of magic. Masters who are dedicated enough to give the lecture to those who are just as passionate.

Maybe we should all bend a spoon at least once in our lives. 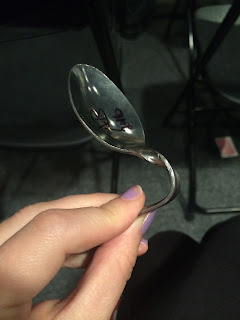 Posted by MissApril at 7:24 AM