Back in the day before I wore my Dickey's Dress out, I was trying to be cool. My photographer friend Terry Snee took this photo. I wanted to look like a bad ass so I asked him for an artificial cigarette. Terry obliged. My mother, of course, was horrified.

Her reaction was one of pure anger. I was living in NYC away from her reach. She demanded to know if I smoked.

I lied and said I never had. The reality was I tried it during theatre camp and wasn't impressed. When I moved to New York, I tried to take up smoking to impress a dude. I also found it calmed my anxiety because ironically it makes you slow down and breathe. My whole life I have struggled with anxiety in some shape and form. Of course I only smoked sparingly once I discovered booze and binge eating had the same effect. But both made me gain weight, plus they made cardio harder.

I didn't want to tell my mom I had smoked here and there because she was a trainer. And also I didn't want to hear all the blah, blah, blah, about how it killed a few of my family members. I had one cousin who was caught smoking who had to visit his grandmother with lung cancer in some hospital and the story sounded depressing but also hit in a place where my stupid lay all too comfortable.

These days I don't smoke, I don't drink, and I eat healthy. But you got to admit, a cigarette does look damn cool on camera. Smoking makes you a dumb ass, not a bad ass. Yet the look is classic.

This photo made several guys who dumped me run on back. It made me get a shit ton of creepy fan mail. As I read my creepy fan mail asking if they could have sex with me and my puppets I thought, "Fuck you ex boyfriends, I don't need you. I have stalkers." 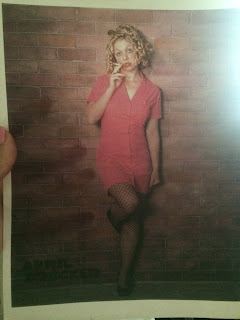 Buy Your Copy of April Unwrapped Today. Proceeds go to Houston Hurricane Victims
Posted by MissApril at 7:00 AM