Last week, I saw an old friend who had just divorced her husband. To put it bluntly, he was a dick. I never met someone who was more inconsiderate in my life. He was disrespectful to his wife, his kids. His family bullied her. I wanted to know why the hell she was so sad that he left her for another woman. Now he was making someone else miserable and screwing up their life.

Breakups are never easy. I know leaving a person who isn't good for us still hurts. But sometimes you are truly better off.

I was trying to explain this to my friend when a woman, who must be from a different dimension entitled Dumb Ass, interrupted me to say, "What you need to do is grieve the end of this relationship. You had a long history. 16 years. 2 kids."

I wanted to give this idiot a gun to blow her damn brains out. Not only was this the most useless advice I have ever heard, but it was from a moron who should have DOOR MAT tattooed on her forehead.

That is the situation that inspired this here meme. 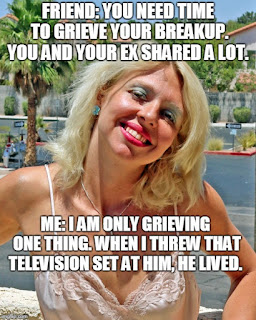