I grew up in a very conservative area. In the morning, when going to school, it was not uncommon to see a prayer circle by the flag pole. There were teachers who had Bible study in their classrooms at lunch. Our school even had an unofficial youth group, Campus Life. Their leader, a white haired adult, wandered the cafeteria looking for fresh blood. Vulnerable lost souls, he would recruit them and tell them to get their friends to come to youth group. So many new recruits and there would be a pizza party.

The principal our school got half way through high school expelled him from the premises. Many of us were creeped out but long since stayed silent. After all, we didn't want the wrath of his Bible quoting parrots upon us. Later this youth group leader went to prison as a sex offender. You fill in the rest.

Our conservative school board was afraid if sex education was taught, kids would have sex. After all, this was the land of the promise ring. Translated, I promise not to have sex in your front, but we can play poker all night in your rear. So they figured if they gave us abstinence education, we wouldn't have sex let alone sex urges at all. Wet dreams and 17 Magazine quizzes were from Satan. God wanted us to stay pure. Jesus the long haired hippie who was screwing a hooker and had a rich Dad wanted this too. Oh and this socialist Jew of course would love the gay hating going on too.

At the front of the health room, there was an acrostic poem on the wall. On the white painted brick it read, BIBLE, Basic Instructions Before Leaving Earth. As class began, papers rattled. The goth kids began to explain there was no God, only Marilyn Manson. While the existence of God is debatable, that was a weak argument. One of the religious nuts, who later would come tumbling out of the closet, screamed that the kid wearing eye makeup was gay. That no man shall lay with another man the way he lies with a woman and blah blah blah. There were two more hours left in the day. Yet high school insecurity and people tenuously holding on to an identity know no time nor hour.

Renee began by telling us she saved herself for marriage. She said her mother explained sex was like M & Ms. Once you had one, you would have the entire bag. Renee opened the bag and poured them down her throat. As she did this, everyone, regardless of belief or nonbelief, stood in utter horror. Renee narrowly managed to avoid choking.

My best friend beside me, she asked, "Did this just happen?"

Renee continued to tell us that her brother had just gotten married. On his wedding day, Renee told him that now he could have sex. That is when her brother apparently buried his head in his hands and told her that he had previously had sex. And he had sinned. Looking back, not only do I assume this is the weirdest brother/sister relationship ever, but this family tree was possibly a straight line.

Note, there was no talk of the man having any responsibility whatsoever. No talk of adoption. Not even exploring abortion. It was the woman who sinned and now she was having a baby. Ironically Kally James, my sworn enemy was the girl in the sketch. A talented artist, she decided she hated me and regularly called me a slut. Meanwhile she was sleeping with a set of twins who were the class ahead of us. Because Renee was so busy slut shaming and not talking about responsibility, Kally would continue to have sex with both boys without the use of condoms, because keeping condoms meant you intended to sin.

Needless to say, Kally had to drop out a year later when she got pregnant and had a baby. Did I mention my high school had the highest teen pregnancy rate in the area? Yeah, so Renee didn't teach me how to put a condom on, but in a pinch I can throw a baby in a dumpster.

Years later, I consider myself a sex positive feminist. My message affirms all women are beautiful in all sizes, as long as they are physically and emotionally healthy. I also know safe sex isn't about slut shaming or abstinence but having sex with someone you feel safe with.

My current book is really funny. It explores my fear of being naked in public. The photos are rather steamy and I will admit it was fun to put together. Sadly, there are no M & Ms. That being said, do you think I should send Renee a copy? 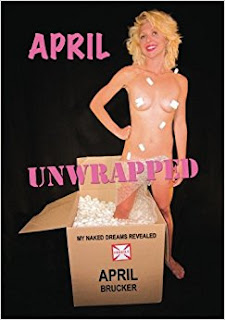 Posted by MissApril at 5:12 PM