An Open Letter to the Muslim Doctors Who Helped Me

To the Muslim Doctors That Helped Me:

I would like to open this letter with my gratitude. Not only for your service and commitment to science, helping others, and the advancement of technology, but for treating me with compassion during one of the worst personal/medical times in my life.

A year ago, I was in a bad living situation. I was living with bed bugs and mold. Instead of taking care of it, my landlord thought he would run me out. That way he could jack the rent up in my apartment. One which I had lived in without incident for 10 years. When I called The City on him, he proceeded to torment me through the legal system. I was in court once a week with this man. He proceeded to follow me around the neighborhood, until one day he told me that he wouldn't stop until he saw me homeless. While in court, he attempted to burn my apartment down after going through my things. He knew where I was going to be. This was the perfect opportunity for his wish to come true.

Due to the stress I had to endure, my health began to fail. My hair was falling out, and I was so stressed I could not digest my food properly. I could not sleep, and when I did I feared bugs were crawling all over me. Often I was so weak I couldn't make it up the stairs, and routinely fainted/passed out. Not to mention I had problems breathing. Do to the stress and poor diet as well as lack of self-care, a test for cancer came back for a certain virus that causes a certain type of cancer. Often, abnormal tests are triggered by stress and a broken down immune system as was the case in my particular situation.

During my first visit to the doctor, I was scared. You often are when you fear they will find something deathly wrong with you. I told the nurse this. Then you walked in. Yes, my Muslim doctor. You heard I was afraid of doctors, and to put me at ease walked in without your robe. In order to get me to relax, and made me laugh. Then you asked what brought me to you. I told the truth. You listened with compassion, and no judgement. By the way you spoke to me, I could tell you cared. At that point in my life, no one else did. You discussed doing some tests to find out why I was so tired, and you told me regardless of what you found, we were going to design a treatment plan so that I could be healthy again.

My second visit contained my test results. This time I had a second doctor. Another Muslim doctor. This one female. It was because my first was back home to visit his family in his home nation. This young woman was fresh out of medical school, and discussed a treatment plan. She told me I was going to be alright, and suggested vitamin supplements that could help me. She also suggested a higher iron diet, and perhaps moving out of my unhealthy situation. While I didn't walk out of there cured, I had a plan. I was going to be okay.

A year later I am healthy. I am out of my horrific living situation. My hair has grown back. As well, I no longer faint and am running anywhere from 2-5 miles a day, depending. I am also weight training. My diet contains more iron, fruits, and vegetables.

I also want to express gratitude for the fact you saw me as a patient, and did not judge me by the color of my skin. You cared about my well-being as a doctor should. As a matter of fact, I kept my same insurance so I could keep you as my doctors. That being said, I apologize for the closed minded bigotry of the leader our country has picked, and I apologize for the Islamophobia that you have experienced at the hands of others.

I also know that Isis does not speak for all practitioners of your faith, just as Army of God and the KKK do not speak for all Christians, my faith. If you are what we are letting in when Muslims come, I say let more in. You are welcome in the America I know and that I grew up to understand. Thank you for being so willing to contribute, even though so many of us are not so kind back.

This summer in Cleveland I was able to march against Trump when he got his nomination. There were shirts that said, "Muslim Doctors Save Lives." I know this to be true.

Thank you for saving mine. 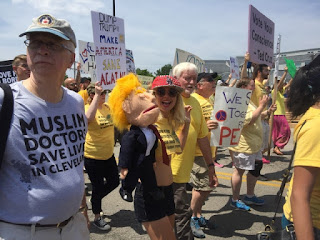 Posted by MissApril at 6:12 PM